It's pretty black & white, from my perspective

I've been aware since long before I started writing that there could be consequences to speaking my mind, especially once things get down to understanding the motives behind the conspiracies. The name-calling started long before I got here, and I could see it for what it was then: a thinly-veiled attempt to change the subject and discredit anybody whose evidence could not be disputed by any 'expert'.

The problem is not whether conspiracies exist or not since proving they do is as simple as asking where WTC7 went and why... Since there is no "official" answer to those two questions, there was a conspiracy to not officially answer those questions, and since it's now uncool to think there ever was a building 7, there is a conspiracy to hide history.

No, the problem is that one can only theorize about who is behind these conspiracies, because the "official" investigation was given less of a budget than Monica Lewinsky's book royalties. It also does not help that much 'evidence' was shipped to China for immediate melting instead of being brought somewhere to be examined thoroughly, thus adding to the level and scope of the conspiracy. Again, we are stuck theorizing because the evidence is now the hull of a warship (appropriately/mockingly named the U.S.S. New York) or a manhole cover and no amount of reexamining these now will prove anything one way or the other. In fact no amount of examining these now, will even prove they were ever part of a building or were ever in New York. It's a funny property of molten steel: it somehow forgets it's previous life

Mayor Bloomberg, a former engineering major, was not concerned about the destruction of the evidence:

If you want to take a look at the construction methods and the design, that's in this day and age what computers do. Just looking at a piece of metal generally doesn't tell you anything.

Funny, I've actually met metallurgists and engineers who would claim the exact opposite... Then, I, have a fairly good understanding of computers and could qualify that computers will give you whatever results you program them to give you. They are a garbage in/garbage out system that will not care if your source data was flawed or missing some vital component, so long as there is enough remaining data to base the simulation on.... If you wanted to, you could reverse gravity and simulate a building falling up then floating off into space, but obviously that is not what they wanted to prove with these simulations.

So if no conspiracy existed, why the need to quickly rid the evidence of being evidential given that repercussions of the events that day led to a war that still has not ended after 11.5 years that has spanned multiple countries and overthrown, and murdered 2 foreign leaders (so far... Queue Assad in: 3, 2...), sometimes without even so much as a trial?

So on to theories. Since no terrorist group ever claimed responsibility or put forth an agenda of any kind, which is unusual for a terrorist group, (and no I don't count this, which doesn't seem to say what they say it says, but with my lack of Arabic understanding they could be exchanging recipes for shish taouk for all I know) we have to ask: who would stand to benefit the most?

Let's try and figure that out via a process of elimination, shall we? 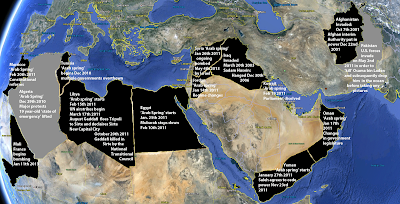 None of these countries have benefit much from the war on terror, and the contrived 'Arab Spring' took care of the rest... I couldn't even highlight Bahrain at this scale... Oh, and I am pretty sure Lebanon is pissed off about Israeli jets invading their airspace while bombing Syria, and Iran has been pointed at a number of times through the whole thing. So there are only three countries left to point at now that Cyprus is going broke... Saudi Arabia, Turkey, and Israel have apparently escaped "official" accusations and molestation, but Turkey might be too far north to fit the rest of this 'line' I appear to have drawn across the map of northern Africa, the Middle-East, and Southern Asia...