So there I was trying to find out if anybody anywhere knows why the Middle East has been canceled until further notice, when all of a sudden the power goes out. Nice mild sunny summer day with zero to complain about in the weather category. So I run through all the possibilities and about 15th on the list was terrorists (if there really is such a thing) so I stepped outside to see if marital law was in effect... I was disappointed. No smoke, no sirens, no cyborg army... Nope. It was lightning. The lightning happened hundreds of kilometers away which was likely why I missed it. Maybe it was terrorist lightning!

There are some theories as to why the sudden al-qaeda threat has taken the static by storm, and some are even plausible, especially given the timing. Mostly, I think it's a means of distraction. I mean, it isn't as though the ground is opening up and swallowing entire backhoes. Nor have the RCMP in Alberta been on a killing spree or anything crazy like that. Sorry, did you say those thing actually did happen? My mistake...

I'd say that the world is crumbling around us, but that is hardly a newsworthy statement, at least not in my world, wherein, each time I open my browser the sky is falling... At least it looks that way here in HOMELAND, which is the country I appear to live in, despite that I don't remember leaving Canada lately. I'd leave the country if I figured I would fare better anywhere else given that I am broke (though, maybe I'm going about it all wrong), just maybe not on a train, since they seem to be dangerous lately, and they'd never let me on a train anyway... I suppose I could always take the bus, because forget flying: 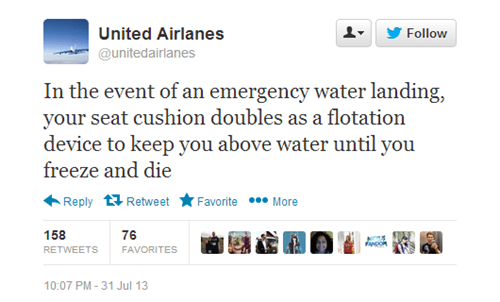 The continuing bad news in my personal life is that I still don't have a job, but from what I've read, I'm not alone, and am even pared with some people who are told they have a job but don't actually get paid. I suppose I'm better off than them since I, at least, am not at the beck and call of some douchebag manager who needs me to arrive in 10 minutes to power through a lunch rush for 20 minutes. That's what jobs appear to be becoming these days, and if I had a job "like" that, I'd find myself using potentially offensive language: fuck you and your three seashells. Why are we making it so complicated to leave a shit anyway?

From my perspective, it's looking as if the plan to enslave everybody had almost reached its completion. Maybe that's why all those embassies have been closed: they need a dynamic work force in some other part of the world... Maybe to help with the bum rush that's going to occur whenever that nuclear (or was that nucular) drill goes live...

I've been working on a corruption litmus test template on NNDB which seems to be holding up well in my beta tests. I've managed to isolate about 13 organizations and think tanks which appear to infiltrate everything else though I'm still on the fence about AEI... I've also noticed something very odd; most of the time, when I stumble across someone in the Freemasons they don't intersect with the trilateral commission, nor Bilderberg and are infrequently in the CFR. Maybe, there is still a whole lot to be added to the database and that is why these groups don't intersect as often as I'd expected.

Oh, and while I am thinking about it, anybody out there using TOR should probably be made aware that it's not so anonymous as it's cracked up to be, which is a very likely reason I was getting the heebie jeebies back when I was researching the dark web.