Democracy is a lie

It is true that I have no rights in the politics in a foreign country, that does not mean those politics in no way affect me. Politics of foreign nations can trigger my sense of injustice and unfairness.

Politics of other countries can overrule my countries unwillingness to participate in 'humanitarian efforts' and 'regime change' abroad by majority vote in some of the international crime syndicates to which my country pays membership dues like NATO and the UN.

So when a recount in the politics of foreign nations reveals really bizarre miscounts like:
Let's examine that 1st one for just a second... Can somebody please demonstrate how it is possible to accidentally count 20 of nothing? I know we aren't really teaching the kidz math anymore, and instead are heavily medicating everyone, but SERIOUSLY!!!! I give to you a basket containing 0 eggs, please verify my count as I see 20 eggs in the basket....

Maybe eggs is the wrong item as they might spoil or break during the transaction... How about using dollars, no, that wouldn't work either 20 dollars might be worth nothing by the time you have examined my wallet....

OK, Drinking straws then, they are already worth next to nothing and thus cannot be devalued, and they are plastic, which we are told does not biodegrade within our lifetime... If I hand you an empty box and and ask you to put 20 drinking straws from that box into 20 glasses of water, how many glasses of water will have drinking straws when you are finished? If your answer is any numeral, decimal, or fraction which is either negative or positive, you have made a miscalculation.

I become even more concerned, when yesterday, I could find several news sources that actually reported these statistical anomalies, today, I can only find these numbers on other blogs when performing google searches. Coincidentally (though likely not actually coincidence), the 3rd result on both bing and google using the terms "Maine GOP Recount" bears the title "Maine GOP chairman: Ron Paul supporters are 'conspiracy theorists'"... But you don't have to take my word for it, as usual a picture is worth a thousand words: 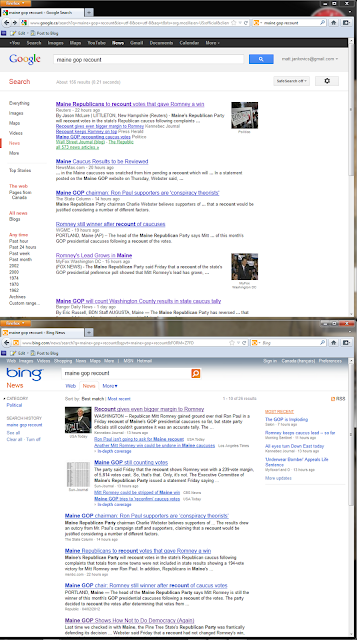