The 'slight of hand' trick had us fooled for a great many years now. But it would appear the people shuffling the deck have become sloppy or possibly arthritic in the wrists. Always with their trusty patsy at their side 'big oil' trying to distract us from what was really at play. Maybe, they should not have been so eager to back-stab their long-time buddy with all the carbon-tax rhetoric. Pointing that finger might have left 'big oil' feeling a bit betrayed, and so 'big oil' has decided to let this hand play in silence. Not that they themselves are without guilt, but they are not the grand-standing event in this rant.

Yes, that's right, and oddly enough the press did not get the script this time either... Maybe the oil used on the printing press had dried up on that day... Oops! A minor mistake, 'big oil' forgot to fill the tanks despite that the bill had been paid. And so the mask that hides our reality slips ever so slightly as John Carney (Senior Editor for CNBC.com) raves about how Libyan rebels are the 1st coo in history to create it's own Central Bank while still enduring active resistance from the incumbent government.
He continues this vein by adding


"It certainly seems to indicate how extraordinarily powerful central bankers have become in our era".

This was all the way back in March of 2011, long before the coop d'état had even finished, and well before October 23 2011 when Libya celebrated it's so-called 'liberation'.


Of course John did stay true to his masters in that he failed to ask that vital question of "Why?". Why would 'so-called' rebels be so quick to create a central bank? Most rebels seek to change repressive or unfair laws, or government structure. Others simply wanted to take the power for themselves, but not these rebels... These rebels willingly and jubilantly give up the power to 'create' money before ever attaining any legal footing as being the recognized government. Something sounds wrong.

And big oil came into the picture after this?!?

NATO called it a humanitarian mission but in all honesty I cannot find anything even remotely inhumane about being a citizen of Libya under Muammar Gaddafi. Housing, medical care, and education were free. When medical procedures or career training were unavailable or insufficient in the country, the citizen was flown somewhere they could get what they required all expenses paid. Each household had a monthly check as part of the countries 'oil profit sharing plan'. Newly married couples were gifted $50000 to start a family. Crime was almost non-existent.... There was so much wealth in the country that "It was a habit in the country that if someone did not like the car anymore, he only had to abandon the car with the key inside". I would really like to hear about all the horrors and atrocities of Libyan life that could possibly outweigh all of this to tip the scales toward being inhumane.

What we've been led to believe has a multi-layered lie within a fib wrapped in outright falsehoods approach under the deliberate pretext that anybody who might think it's about oil is wrong, and so that anybody thinking it's about the gold is also wrong. So what was Libya about?

It's about the same thing as Iraq was about... That wasn't oil, WMDs, or humanitarian efforts either.

Iraq
To put it plainly, Saddam Husein made a choice in November of 2000. He chose to use the Euro as Iraq's foreign exchange currency instead of the U.S. dollar. He also chose to do this when the Euro would only buy 85 cents US. Of course this did not last according to this graph: 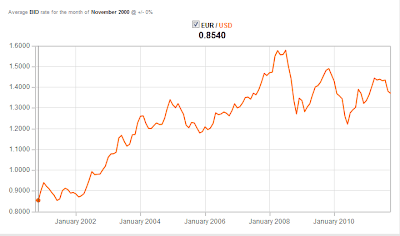 Funny enough it drops back down just in time for the War on Terror to begin and for Iraq to be named as part of the infamous-though-now-long-forgotten "Axis of Evil". The simple fact was, the U.S. was not about to give up it's status as the "World reserve currency" and once one oil producing nation fares well by making this decision, it must be made an example of before other oil producing nations catch on. If Saddam had managed to quietly convince the Saudis, Libyans, and one more oil-rich nation to do this on the same day as he did, the U.S. would have bankrupted faster than they could scramble to launch a single jet squadron...Money was the real reason for this war, oil was a good fall guy after the lack of WMDs and or Iraqi population that was none too happy with their new occupying force...


The Banking Law was issued September 19, 2003. The law brings Iraq’s legal framework for banking in line with international standards, and seeks to promote confidence in the banking system by establishing a safe, sound, competitive and accessible banking system.

As I thought... 'International Standards'... 'Promote confidence in the banking system' and other propaganda as you might expect to be written by those who exist to solely to rob you blind. So Iraq obviously still owned it's own central banks and the conglomerate that owns the rest of us couldn't have liked that one bit.

But was the same true of Libya?

Libya
Libya did still own it's own central bank before these "rebels" "Nato financed, al Qaeda goons" took over the country. But, could that be the sole reason? Libya had owned it's own money a long time, and the press decided Gaddafi was not really news worthy decades ago. Sure his anti-American rhetoric was high on the propaganda list, but that's never really driven an outright war on it's own accord. And really what that rhetoric was trying to do was motivate his own people to innovate and become less reliant on imports, not raise a cause for going to war against the U.S.

So what's missing?
Libya, or more importantly, Gaddafi was proposing not only an African Union like the Euro corporation (or European Austerity Measures Conglomerate, I can't decide), but his African Union would have used the Libyan Dinar model as it's standard currency, and maintained a governmentally owned central bank. The Dinar was not only 'backed by gold' it was actually 'made of gold'. …And Libya had no foreign debt, and it had actual reserves. You know, like a positive bank balance, and zero balance on all the credit cards?! I know most of us have never heard of such a thing, and it was long thought to be extinct or even mythical like unicorns, but Libya actually had this leprechaun in it's possession.

Imagine the nerve of that evil dictator to try and share his countries oil profit with all those countries the west needs to keep in unstable servitude so they can't see us stealing their diamonds while scaring their land. Think about it for a second, how many years have we in the west given 'money to aid the starving in Africa'? I am pretty certain that if that 'money for the needy orphans' were added up it would be greater than the current U.S. deficit, and would have been enough to start a farming colony on Mars to feed the needy martians by now. But all it really needed was a single evil dictator, er,  financial terrorist, um, oppressor of human rights, er, human being to correct the problem...

Libya, like Iraq was positioning itself 'against U.S. interests' which means trying to expose the dog and pony show behind the U.S. debt based economy, leaving egg on the faces of our corporate slave traders while they scramble to replace their worthless overabundant paper with something somebody actually wants or needs. We in the west might term it 'financial terrorism' but remember, we in the west have also called it 'humanitarianism' (or was that humaniterrorism, I cannot remember how it is spelled at the moment) to bomb Libya.

And that's why we killed him, your honour.