death of a used condom salesmen

I'll admit it... I've fallen behind in my reading in the last 24 hours and now find myself trying to make heads or tails of things... Some things have presented some great irony:

It always stresses me out to find hundreds and hundreds of unread items, and it tends to lead me to feel like I have to rush my decision making process (or forgo it altogether), and often leads to making bad judgement calls.

As a second admission, I have no idea what to focus on or speak about today... I could trumpet and parrot on about some of the things tend to fall back on when I can think of nothing else to say. The Zionist owned media, banking and politics is always an easy target as are other super wealthy scumbags. I could simply reiterate just how insane the world has become... Maybe it's not this crazy yet, but... we're certainly approaching this point:

I understand that the underlying principle of all of this is to make me want to shut down and stop resisting the brainwash cycle. But if that were truly the case, we would not have such high praise, and media spotlight given to people who are creepier and more shifty than a used condom salesman, would we? It isn't that I choose not to believe in all the fakeries out there, but rather that I choose to ask questions and examine the logic of things...

One of those logics that isn't sitting well with me is how an NSA contractor manages to steal NSA data on NSA laptops and somehow elude an agency that 'supposedly' listens to every phone call and captures all skype and email traffic... It leads me to believe, something I considered all the way back to the Hepter V. AT&T 'secret rooms' story broke: too much data is an unruly mess that nobody wants to look at... Consider it for a second in this manner: take the entire set of Encyclopedia Britannica, tear out all the pages, then shuffle them and place them in random piles on a desk... Somewhere on this desk is an article about salamanders, but there isn't enough money in the world to compel you to look for it now, is there? So there are only 2 things that can come out of this NSA leak:

There is still a third option which is that they are testing what the public thinks about their new data center which is meant to help them sift through all the data they've already gathered (let's assume it will reassemble the encyclopedia you tore up in the last paragraph, because they'd need a pretty pricey computer for that)... Yes, I realize I've pointed out the same paths using a different mode of transport to get there, but with organizations like the NSA, I see them having a single-minded path: become the omnipotent fly on the wall.

On a completely unrelated topic... I think I might have stumbled upon some censorship going on... I have clicked on a couple of links in my news feed and received the "oops! we have no idea what you are trying to look at, but it ain't there" from my browser... Let's just say I was not inclined to believe that either so I checked it out in TOR: 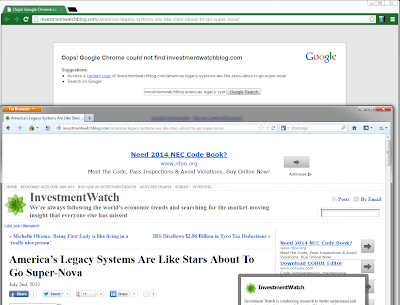 It works on my phone too (it's on WiFi using the same router that my PC is attached to), so it's not my ISP. Hmmm... It works in browsers that are not Chrome too (and it even works in Chrome mobile for Android)... I think it's time to go back to using only Linux and open source software (PS, that's the link that doesn't seem to work in Chrome)... Maybe I just need to look into some of the 'not Google' alternatives, and before you speak of practicing what I preach, I haven't found an alternative to 'blogger' that I actually like so it becomes a moot point.

I have long considered that whatever I say or do online was monitored anyway, so do I risk not doing or saying it? Of course not... That is the whole point of creating paranoia in the first place: make people too afraid to speak or act. Maybe I am already paying a price for not cowering to fear-mongering. Goodness knows I am not eligible for that insurance I paid for for the past 5 years and I have even complained about reforms to that system here in an article called "you can't always get what you paid for", either as a tragic irony, or self-fulfilling prophecy. Chances are I'm not even eligible for hand-outs, though I do not suspect I will be asking for those, likely in fear that I am correct about my ineligibility.

Of course the true test of character is if I had it all to do again, differently, would I? The reality is, I wouldn't. There have been many things I've said and even done that I can look back on and say: 'what an idiot that guy was', but speaking my mind is doesn't fit that category, because even in instances where I was wrong, I learned how not to be wrong going forward.