How here is now?

So it would appear that somebody has sent a message to our leaders, and then he packed his suitcase and went away. It may have been lost in translation, or lost at the post office, but it it was clearly a message. Maybe he was high on Manchurian LSD or some other psychotropic drugs, but at times like this I often ask myself 'What would Karla do?', then I realize that Karla would do what Karla does and that is all there really is to that.

Is it warm in here? Maybe it's me.

You can't always get what you paid for

Employment Insurance. We all pay for it as a separate deduction, so it's not (apparently) a tax, but what does it entitle us to anymore? Years ago they made it difficult to quit a job (even a horrible one), for the risk of loosing your right to benefits. At the same time, getting fired (even unfairly) became a sticking point which you could be penalized for. In fact 12 years ago, after I had been maxing out my EI insurance payments by May for several years running, they reduced the maximum payments and maximum weeks of eligibility just a few months before I was to actually need to cash in on what I had been paying for for the previous 6 years.

I thought it simply wonderful to be making 40% of my previous salary, and to be badgered to take a job paying 5% lower than that, by my case worker. I was under no obligation to take the near minimum wage jobs that I was being offered, and more importantly, some of the interviews I was sent to were an utter waste of time as the position had been filled several months ago. But to find out that the next time I might need this insurance which I have been paying for, I might have to take another 30% pay cut in a field of work that isn't even related to what I have been doing for the past 10 years only cements my stance on how useless the government is, and how hopelessly broken the entire system has become.

You shall not mask!

So this new legislation put into effect by the Quebec government, or the city of Montreal (or the government of Canada), which bans the wearing of masks, and makes it mandatory to advise police of plans to protest in large groups, has had little to no impact. And why should it? It is a silly law intended to revoke our rights to be counted but not identified, and to revoke our right to protest. True, Montreal has practically been a war-zone for a third of the year now, but can that all be blamed on protestors?

My hat is off for Margaret Sutherland for her wonderful usage of cynicism and symbolism, however, I might add that she missed the opportunity to paint one of the suits peeling him a grape... I don't usually 'get' art and it even more seldom 'sings' to me. This piece is deserving of the Fine Arts Museum of Ottawa, or maybe the entrance of parliament.

Federal study suggests relocating EI recipients. ... To Regina aboard a freight train ...Because Regina has the lowest unemployment rate in the country right now now (@ 3.2%). Of, course there is no mention in that number if those 3.2% are looking for good jobs or better than good jobs, since there is no such thing as a bad job anymore, nope, the government must have decreed that there are no bad jobs and now it is possibly illegal to claim that your job is BAD. I will have to consult my latest copy of 'Canadian law for dummies' to verify this claim, that is, if I can lift it.

And they say the MOB no longer exists

This sounds more like a stereotypical news story out of the prohibition years, or pre-Disneyland Las Vegas. It would be funny if only it weren't so sad.

Safe, if only for a little while

There is no spoon, so the spoon cannot be dirty.

According to Canada's finance minister there are no bad jobs, only lazy people. I find the very thought of this to be laughable when it comes from someone sucking the taxpayer tit for far more money than he is likely worth. It would appear that the political elite have become so far disconnected from the rest of society that there may not be any salvation even after the best available deprogramming centers have had a crack at it.

This article makes a helluvalotta sense...

Email ThisBlogThis!Share to TwitterShare to FacebookShare to Pinterest
Links to this post
Labels: Fall of the western empire, Fascism, N.W.O., Police State, Propaganda

Much news is no news

Is it just me? Maybe it is. But it appears to me that every media source whether major, minor, or underground has upped the ante this week. But, there does not seem to be any causality to it at all: 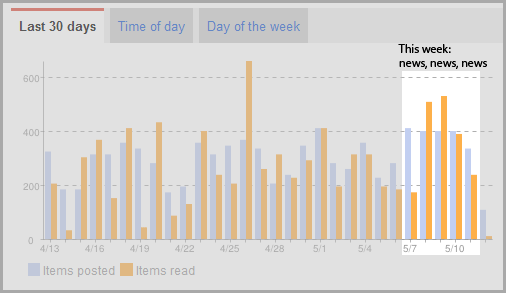 Suddenly, the busiest news week in a long time, and it is about nothing. There is nothing extraordinarily different in anything I have read this week, in contrast to any other week. I have not suddenly added 10 new feeds, and, in fact, removed 2 feeds that were redundant a couple of weeks ago. The vast majority of everything I have received in these feeds are ‘GOP candidate this’, ‘Obama that’, JP Morgan broke the bank, Fukushima will kill us, government is corrupt and corporations eat babies, Europe being dragged of a cliff by PIIGS, and China owns the universe… But (U.S. presidential race aside), none of this is really any different than last week, or even last year for that matter.

Have both sides in the media colluded to hide something big in between the MSM and the Blogosphere? Did some conglomerate buy up all the independent sources of media I consume last Sunday? Or, do I simply need to stop reading so much and find some other thing to consume my time with until after the November U.S. election?

Email ThisBlogThis!Share to TwitterShare to FacebookShare to Pinterest
Links to this post
Labels: Propaganda, The Media-Industrial Complex

I’ve changed my mind, sort of…

I know that I have not delved into my own back yard very much despite the war-zone the media has bombarded me with in recent months. I have been slow to chose an angle which I could truly support in the Government vs Student clash that has been paraded about like a ratings show pony, with one side’s vandalism, transportation/transit disruptions, and displays of public nudity, and the other side’s brutality, plastic bullets, tear gas, and heavy-handed arrests. In some part this has only been for my belief that there has to be more to this than simple tuition hikes, because in all seriousness, these protests have already cost more in added police presence than the tuition hikes would have earned the universities over several decades.

I found it… The money we’ve all lost

There it is right there, 16% profit gains for 2011 over 2010, a record high of $825 Billion… Over one hundred million are unemployed in the U.S., Greece is collapsing amidst the ongoing depression which will, soon enough, take out the rest of Europe, but never fear the fortune 500 are in good shape.

Divide and be conquered

I am fairly certain that we are all feeling a mounting pressure regardless of what part of the planet we live in. The struggles of day to day life, whether impoverished and starving in Africa, being bombed and falsely demonized in the middle-east, slowly decaying from radiation poisoning in Asia, or even, watching hopelessly while the western world collapses around us to realize the dream was a lie from the start. What we are witnessing, each from our own perspective, is the rape and plundering of this planet by pure unadulterated greed tempered with a complete lack of compassion or honesty. I stand firm in my belief that every person with even an ounce of decency or empathy was promised a brighter and more promising future than the dung heap we’ve been handed. Only the few who were instrumental in guiding canoe up shit’s creek can still smell roses.

Prosperity™. And these other things…

The Harper™ Government appears to have learned a few tricks from The Patriot Act™ among other U.S. Legislations with Bill C-38. What they have learned is quite simply this: if you group many things together under a pretty name and introduce this bill to a vote while vacation is approaching it will quite likely be passed into law.

I am not certain if I should be proud or insulted to be on the "priority watch list" of The Office of the United States Trade Representative's 2012 Special 301 Report [PDF alert]. Canada has made the highest rank on the list in a dead heat with: Algeria, Argentina, Chile, China, India, Indonesia, Israel, Pakistan, Russia, Thailand, Ukraine, & Venezuela... Columbia & Mexico are only on the "watch list", they are not a priority