and that's all I've got to say about that

Some days I think I was finished getting upset only to turn around and realize that I'm really not. An hour has gone by since my last post, then I stumble upon this. I am happy that one of the commenters points out that we do have laws against the distribution of pictures involving minors engaged in sexual acts, but it simply isn't enough to prevent me from seeing the obvious... Joe public is pointing out legislation that an elected legislator should be expected to know already!!!

Yes this idiot's title is justice minister, and he feels we need a law that would have illegalized an illegal act.

Sounds really stupid when it's all laid bare like that, doesn't it?

As the war machine turns

So many things and so little time... I'd love to pick a place to start but there is no real cohesive story to any of it... So it would appear that the static is back to being static.

I'm not sure if Boston was on my 'to-watch' list or not but there are certainly some odd coincidences. Everybody was present for the event, and a 'drill' similar to the event was being performed at the time. Then there was some anthrax ricin sent in the mail, and everybody has already told us who to blame, despite this, or this. I'm sure there is a word which describes all of this, and there's likely a reason too. I just can't seem to figure it out.

Do you have a permit for that?

How many independence days does Canada celebrate? Most people would think the answer to be one... They are incorrect based on what I witnessed downtown yesterday:
All the kings horses and all the kings men were there to make sure things went smoothly, too: 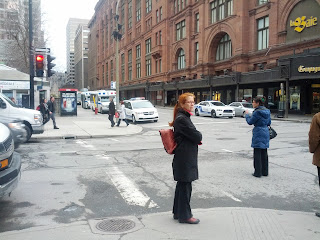 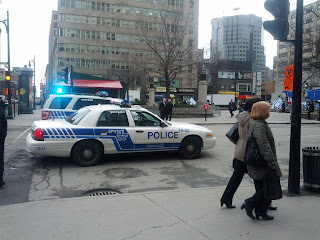 I debated asking these people for their permit to 'congregate in groups larger than 5' but I had an appointment that I figured I would miss, had I been arrested... I even had to walk through it to get to that appointment:

The fictional disparity between you and I

I've just had a major deja vu. Yesterday I went off on a tangent about this fake disparity between available jobs and qualified workers, and I hadn't even read anything about this topic yet. It's not, so much, a surprise that it's happening. No the surprise is that it's getting media coverage. In some cases it's getting so much attention that some rich and powerful monsters are having to back-paddle and put on their best compassion act. Not to worry though, because they don't think profits will be hurt... Maybe because they'll just turn around and do this.

Which brings me back to a question of stalemate. I didn't pay it much attention yesterday when I asked it, possibly because I don't actually think it's really deadlocked. I think it's more likely that the larger plans to destroy the economy and sovereignty of nations has had to go on the back burner until they've figured out how to shut off the internet but still use it to move cash to the Caymans... Which is no simple task to say the least. Obviously using copyright and intellectual property lawsuits have worn thin and three or six strikes systems are too slow, and not actually effective since I could simply blog post from a coffee shop, which might also be used to move cash to the Caymans from...

Obviously a new diversion is needed to distract us from what's actually going on, and so we've seen some recently created boogeymen being flogged about, even if they aren't so recently created. But recency was never the point of any of this because the point was really just to be pointing anywhere but here whenever the man behind the curtain needs to take a piss. I tend to believe that the war on truth will not be determined by how many bullets anybody owns, but rather that the truth cannot be tarnished by lies if left out in the open air.

Things become more obvious as more and more accounts become due and soon enough we'll either beleive this, or we will beleive the exact opposite. While some other things are already very obviously out of whack already. Ultimately everything boils down to where to safely store your outrage until you've found the best time and place for it to be put to good use. Mine is spent right here in an effort to serve as an example, whether good or bad, for others to draw from because voting does not work, and the results we're getting from all the protests appear negligible at best.

The gravy train has been swapped out for the diarrhea wagon

I know the gravy train has left the station and has no intention of ever returning here. I've only been writing about it for several years now so I'm not going to gloat, nor piss and moan about it. But I'm certainly growing ever more impatient with this foolish waiting game. We appear to be in some dancing on eggshells while somehow walking a tightrope phase of things. Is it possible we have hit a stalemate?

I know, from the conversations I have with friends, family, and random strangers, as well as call in radio shows and random eavesdropping that people have no faith in politicians, corporations, banks, or any other thing that once was good (banks excluded, they've not had any history of ever being good) but is now an institution. Then in the other hand the masses are completely ignored by the politicians whom, are said to, work for all the "people" who have lost their faith.

Everybody can see there is zero credibility in a person all up in arms about this, when they've just gone and done this. Yet, somehow, these things continue to happen as if nothing happened yesterday as though some kind of memory wipe happened overnight.

Email ThisBlogThis!Share to TwitterShare to FacebookShare to Pinterest
Links to this post
Labels: Canadian Politics, Fall of the western empire, Totalitarianism

An opaque chameleon in the transparent world

I have cut myself off from the world lately. It's been weeks since I read any news, and I've barely left the house. It's been a very deliberated effort to try to listen to the world from my inner ear... I don't feel I missed very much, and I don't feel any differently now than I did then. I guess things just don't change much in that short a timeframe...

I do this in the hopes of finding my reinvention, just as I have done so many times before. I can only play the role of cog in the machine for small bursts of time before everything falls apart. It's easy to lose things that you never actually had, by that I mean faith.

Email ThisBlogThis!Share to TwitterShare to FacebookShare to Pinterest
Links to this post
Labels: Economic Collapse, Fall of the western empire, Fascism

I live in the cage of your beliefs. It's a world I neither built nor chose to reside in, yet there it is, everywhere.

It's a world void of justice or harmony where terrorist boogeymen and bankers collude amongst themselves buying politicians at wholesale prices. Every perversion is just a couple of channel clicks away to keep you comfortably distracted and unfocused on the goings on that are going on.

I am no longer a number in it. Statistically, I am nobody: neither employed, nor unemployed.

I'm expected to pay taxes with money I cannot create out of thin air, to those who can create money out of thin air to pay for services I've never used while being denied access to the only services I actually need, and to pay the salaries of people I did not vote for. I get to pay extra so that tax exempt child molesters are allowed to live in sanctuary while selling redemption and preaching morals from a decaying pulpit.

I pay for corporations who don't hire me to pay out bonuses to those who can't read the writing on the wall, and failed to comprehend that nothing can be status quo forever and continue to thrive endlessly unadaptive, yet persist in using moronic phrases like 'think outside the box'.

My past labours are the cornerstone in an ivory tower that security guards are paid minimum wage to prevent me from entering.

Many out there can see it, many out there talk about it, but still everybody appears to be content to find their place within it. Mindlessly they latch on to some old cliché about voting, or boycotting, or protesting without coming to terms with the fact that these avenues all lead to exactly where we are now, but with less energy than we had before we travelled them. Unsuspecting or unaware that this energy drain means these avenues are working as intended.

Freedom is not something that is given away, freely. Freedom can only be earned, or stolen, and those of us who've been sold the lie that we were born into freedom have not been earning it, so it can only stand to reason that it is being stolen from us.