There are three possible scenarios which I see being used to trigger war against Iran.

The broken record that is the media and it's continuous efforts to villanize all Arabic nations not already under USrael's control either by Al Quaeda proxy uprising or by puppet CIA/Mossad/Banker owned politicians has been giving me a headache for weeks. So I am overjoyed when the occasion arises that they trip on their own feet in a tantrum induced frenzy so childishly foolish that it looks like a 3 year-old who has been told 'no ice cream before dinner'... It's even better when they have the global audiences attention because it makes those normally called crackpot tin-foil hat wearers look guilty of no more than responsible parenting:

trapped in shit castle without an exit

I don't know if it's the fact that soon we'll have nothing to hide, by order of the government, an organization that seems to do nothing but hide, or the fact that they can be so blatant when they choose to expose their agenda through symbolism, but I am definitely getting more and more annoyed lately. Bankers continue to do what bankers do, police keep deliberately looking in the wrong direction, politicians continue to promise the not possible, and citizens get stuck holding the whole flaming bag of shit without even so much as an oven Romney, er, I mean, mitt.

The banner atop the highest pinnacle of this castle of shit simply reads: Purgamentum init, exit purgamentum. Of course it's in Latin so that few question whether it actually has any meaning or not, and fewer still, question what that meaning actually is. But sufficed to say your soaking in it now and that's all that counts. Email ThisBlogThis!Share to TwitterShare to FacebookShare to Pinterest
Links to this post
Labels: Censorship, Fall of the western empire, Media dis-information, N.W.O., The Media-Industrial Complex

I find it interesting when a News reporting service does not even bother to re-host the videos they are reporting about: 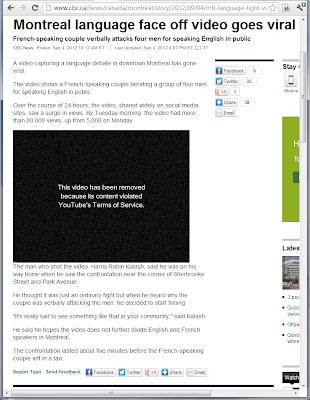 So now, we do not get to see the video they are speaking of a meager 2 weeks later. I am not certain what Terms of Service this video violated because I did not have time to watch it while the thought police had overlooked it. However, now that it is on the public record as "NEWS" I think they might need to re-examine things just a little...

Email ThisBlogThis!Share to TwitterShare to FacebookShare to Pinterest
Links to this post
Labels: Censorship, copyright law, Fall of the western empire, The Media-Industrial Complex

I won't deny that I've lost everything I own more than once this lifetime. Other than the couple of guitars that have managed to follow me through the years, I don't really care much for things... I can find pride in who I am and don't generally need huge ego bolstering compliments, nor do I feel the need to put others down in order to prop myself up. Granted, I doubt there have been many people who've known me throughout the years who would have held any great envy of me, my life, or my material possessions other than the occasional envy of who I was dating from time to time (while failing to note the long periods of time I sometime spend in self-imposed exile from the 'dating' scene). But lust is fickle, and that cannot be avoided at all times, especially if it is not your own...

Which makes it odd when I realize that so many people out there seem to justify their existence on the fancy 'things' they can show off about.

Email ThisBlogThis!Share to TwitterShare to FacebookShare to Pinterest
Links to this post
Labels: Fall of the western empire, Finance, N.W.O.

I realize that only yesterday, I made some mention to us not being too late to fix the problem wherein we are dumb as a bag of hammers, but that was before I read that even smart and highly trained people might be stupider. Maybe there was life on Mars, before we sent our flu bugs to populate it (microbes, bacteria, etc.) but we will never know that now or ever in the future because we've tainted any future findings. I know that sometimes protocol doesn't make a large amount of sense in a large bureaucratic entity, but sterilization of shit that might inadvertently teraform a neighbouring planet actually does make a great deal of sense and I cannot find any good angle to dispute this.

I know everybody's going to be mentioning the eleven year anniversary of the 9/11 False Flag Events. And they will make you feel all warm and brain-washed inside and you will rise from your arm-chair chanting some propaganda meant to make you feel superior to everyone else. Don't get me wrong, that day was one of the largest man-made tragedies ever recorded, but not for the reasons everybody on the idiot box talks about.

Freedom and Liberty gasped their final breath on that day. Yes, after decades of having a boot heel on the throat they finally ceased to exist. There was no funeral service as most people did not notice they were missing. They'd already been replaced by impostors: Safety and Security.

Can you handle the truth?

The truth is a funny thing in our day and age. I am told that many are looking for it and some are even finding it in small increments, which is probably better then the all out kick to the groin of realizing just how big the lie truly is all at once. Well, metaphorically speaking anyway. Because it really is not all about one big lie but thousands of small lies in varying states of decay, each of which has repeatedly battered, tortured, and raped the truth until it is so unrecognizable that one can barely discern it even when it is staring you right in the face.

You see, it isn't that the truth is not out there, so much as it is that the truth has to pin you down and force feed you until you are ready to vomit before you actually accept it for what it is. You've been trained all your life to be afraid of the truth; the truth is the boogerman (wink); the truth is Pandora's brain fart; the truth leaves a bad taste in your mouth; the truth is more toxic than fluoridated radioactive particles; and the truth will draw out the four horsemen of the Appalachians.

Email ThisBlogThis!Share to TwitterShare to FacebookShare to Pinterest
Links to this post
Labels: 9/11 cover-up, Fall of the western empire

I'd vote for the separatists if their dream sounded like less of a dream than an actual plausible solution. You see, in every scenario I've heard these separatists (not the new separatists, or the ones who aren't talking about separation, but the old separatists who've been around longer than a week) talk about, they want to move out of their parents house and into the bachelor apartment in the basement, rent free and with an allowance. -- OR -- to stop paraphrasing, they would be their own country but continue to use the Canadian dollar as currency, which is essentially the exact same thing I just said before.