I spy, with my little eye, something with the colour of 'stupid'

Politics has become nothing, if not predictable. I suppose I have a certain wisdom due to my local surroundings which explains why I am so unsurprised to find out that the dead horse mantra is not dead. I've lived my entire life in a politically charged atmosphere, overflowing with corruption, that has flogged a separatist agenda for most of my life (if not before), and actually has a 'language police'. From my perspective it actually looks like someone let the stupid out of a bottle stamped with "consignee 5¢ refund Quebec", and it spilled into the rest of the world. I know that this isn't true as I have studied history enough to realize that stupid likely came forth from somebody rubbing a genie lamp at some time before the Egyptian pyramids were built, but obviously this study was after I'd already observed a whole bushel of stupid in my own surroundings. (OK, maybe this stupid is recent... But it sure was stupid)

All this stupid has been planted to present you with the understanding that cars explode at any impact over 4 Mph (or 6.43 Km/h en français), or at least they do in Hollywood. Why would you question this logic when we've watched exploding cars on the big screen for so many decades now. Gasoline is not as explosive as the movies let on. It's highly flammable, yes, but explosions require a good evaporated gas fume to air ratio for a proper kaboom... This is what the carburetor, or more recently fuel injector's purpose is, to mix fuel with air, then to be lit by spark plugs making a controlled explosion that moves a piston. Too much fuel and the engine becomes "flooded" and no controlled explosion can happen until the fumes dissipate. In other words, a car with a full tank of gas might burn itself to ashes before exploding, though the headlights may 'pop' depending on the type.

Speaking of stupid, I will take some time to suggest that you should not try this at home. It might sound good on paper (and in fact, it likely works very well on paper), but does not carry over to electronic documents, especially not blogs, web pages, or email. The reason for that is very simple: electronic documents use a markup language that is parsed by the computer when the document is loaded to describe the fonts to be used, and other elements like indentation, line-spacing, color, etc. To site a very simplified example:

Your browser reads all the things in the <> brackets as instructions which it does not show you, and the text itself is completely unformatted. Worse still, if you don't have Arial, or Helvetica installed then any sans-serif font is used. I have no idea who they think they are fooling when this article clearly states you can use this in an email... Email does not even use a proprietary markup like MS Word's custom msoXML (and PDF with selectable text is no better for the same reasons), it uses HTML which is the simplest and most basic of markup languages... This font idea only works on printed documents, or text stored in images (like those awful 'kaptcha' prove you're a human things that are everywhere). And before I leave the topic of HTML... Just remember that progress and problem share their first 3 letters with each other. 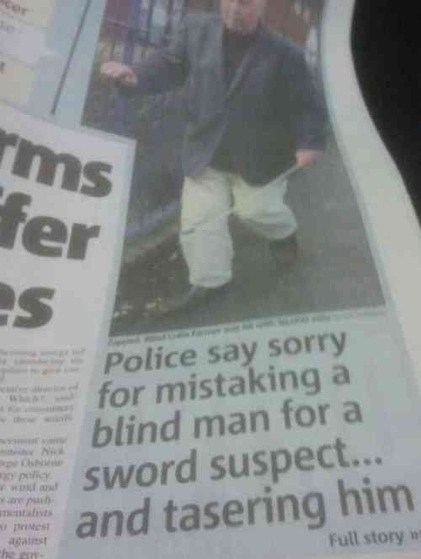 We have to stop allowing the stupid to infiltrate us so thoroughly that the powers that be are able to do, whatever stupidities they think they can get away with. How many examples do we need to see before the realization sets in that the abuse of power is going on everywhere. It's spreading like a plague under agendas of many names. Widespread spying being exposed in multiple countries is only the beginning of the things being unearthed.

Maybe all my rhetoric leads you to ask, "but, dirtykid©, what if you're wrong?" Well, there's only one answer to that: then I am wrong... Most times I am not presenting answers, but simply challenging the reader to think for themselves, that in itself can never be wrong... But as for that HTML bit I spoke about above, I am not wrong. As for other things with much larger implications, I am much more concerned with the question: 'what if I am right?'